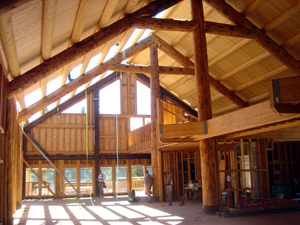 Pine Mountain Lake residents Jerry and Paula Baker, the couple building a Groveland-area camp for kids with special medical needs, are the grand marshals of Saturday’s ’49er Festival. The Bakers, riding in an antique convertible, will be the second of 54 entries in the 9 a.m. parade down Main Street.

“It’s pretty exciting,” Jerry Baker said late last week from Tuolumne Trails, the 80-acre camp off Ferretti Road. “We’ve just had a tremendous amount of support.” In fact, community members have done everything from build bunkhouses to sew hundreds of pillowcases for the camp. “It’s an honor to see this community do something we can all be proud of,” Paula Baker said.

On a tour of the camp Friday, the Bakers enthusiastically showed off a 13,000 square-foot Great Hall soon to have its own elevator, two bathhouses equipped with wheelchair-accessible showers and a built-in swimming pool with four fountains.

Work on the Great Hall should be complete in about two months, and this January a group of children with neurological disorders should become Tuolumne Trails’ first official campers.

The Bakers are being honored because of their “dedication and efforts” with building Tuolumne Trails. They have been working on the camp for the past three years and originally hoped to have opened the camp this summer, but the permit-approval process and changes with contractors have delayed the project.

Both retired, the Bakers moved full-time to PML nearly six years ago. The Bakers’ son, Scott, is the inspiration behind the camp. At the age of 9 he was diagnosed with a brain tumor and the Bakers saw a need for a place like Tuolumne Trails. At the camp, kids will be able to do traditional activities like crafts, games and roasting marshmallows. Scott Baker, who now lives in Arizona and turns 27 on Thursday, came home to visit and be part of the festival. He will be carrying a banner, along with his brother and sister-in-law, announcing his parents as grand marshals.