A Community That Never Gave Up 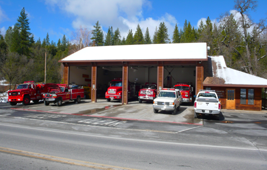 They didn’t get a cent from Washington or Sacramento. They didn’t hire paid grant writers to send out pleas for cash. They didn’t approach Tuolumne County supervisors with hat in hand.

Instead the people of Groveland and Big Oak Flat got their library and museum the old-fashioned way: They earned it. It took more concerts, bake sales, auctions, spaghetti dinners and drawings than anyone involved cares to remember. But 15 years and nearly $700,000 later, a distant dream has become an asset and a source of highly justified pride.

“A shining testament to community spirit,” is the way Supervisor Mark Thornton put it.

The library has been operating since December 2000 and the museum had a “soft opening” in February. But Saturday will mark the formal dedication and coming out party for this handsome new building, off Highway 120 near Groveland Wayside Park.

Organizers promise “the biggest shindig since World War II ended.” And those involved in the marathon effort deserve every toast that may be raised. Their efforts have been unceasing, Herculean and, in this era of government handouts and strings-attached cash, completely independent.

“We didn’t get a cent from government until after we had met our own fund-raising goals said Gordon Norris, president of the Southern Tuolumne County Historical Society. Here’s the bottom line: The museum-library will end up costing close to $700,000. Aside from $50,000 in Tuolumne County funds and a Sonora Area Foundation grant in the same amount – both received late In the process – every cent was raised by Grovelanders themselves.

The story began in 1986, when the late Avis Gookin, Ruth Kraenzel, Mary Laveroni and Wally Anker got together to found the new south county historical society (STCHS). “We thought it was high time our community had its own museum,” said Anker, a descendant of the area’s pioneer Priest family. By 1988, a library had become part of the plan, society membership had reached 100, the fundraising target was $300,000 and construction looked to be about five years away.

The late Hal Pennock, an architect, designed the building free of charge. The Groveland Community Services District provided the land. Contractor Ken Goens, construction manager, donated much of his time, as did numerous tradesmen and builders.

Against what some might have said were impossible odds, the museum-library building is now complete.

Today it stands both as a tribute to its own community and as an inspiration to other communities. Union Democrat 2001 Editorial