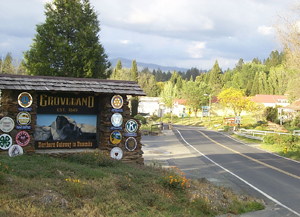 Hundreds of south Tuolumne County residents gathered Saturday to celebrate the formal opening of their new Groveland Yosemite Gateway Museum and Library. “It’s a big show for a little community,” said Kessen Sawday, a member of the museum’s Board of Directors, watching the hometown crowd pour through the doors Saturday morning. “We had a good time putting all of this together and it was unbelievable the number of people who helped.”

Area residents filled Wayside Park on Highway 120 for the museum dedication and annual Poison Oaker Picnic. “It’s a great feeling! This represents a lot of hard work by a lot of people,” said museum board President Gordon Norris. “There have been thousands of donations and hundreds who worked on this. It is a real asset to the community.” While the building’s formal dedication was Saturday, the library actually opened to the public in December.

Library assistant Donna Manship said the community is already making full use of the building. “Our circulation has skyrocketed,” she said as a puppeteer entertained children nearby. “We gave out 95 library cards last year (at the former location) and we’ve already given out 650 cards this year,”

Among those admiring exhibits at the new museum was Charlie Heath, Groveland’s “Can-Man,” who collected thousands of aluminum soda and beer cans to help raise money for the building. “I came up with the idea nine years ago and it just caught on,” he said of his fund-raising can collecting. “Everything has to start with an idea.”

The Groveland community raised over $700,000 to build the 9,000-square-foot structure. Planning, fund-raising and construction for the project took about 15 years.

Docent Karlin Merrill pointed out one new exhibit, “History of Mountain Climbing in Yosemite,” and noted Groveland mountain climber Conrad Anker donated an ice ax he used to conquer Mount Everest to the museum. “I’m very proud we could have such a facility with so many wonderful displays,” Merrill said. Saturday night, the climber put on a slide show as part of the town‘s museum celebration.

Under bright noon sun, 40 members of the Tioga-Tenaya Marching Band showed off new navy and gold band uniforms and hats while waiting to perform for the bulging picnic crowd. “This is the first time we’ve had brand new uniforms. Prior to this the kids wore jeans and T-shirts,” said Diane Steele. “We had an incredible amount of support from the community with our fund-raising projects including our cookie dough sales.” By Julia Hollister, Union Democrat